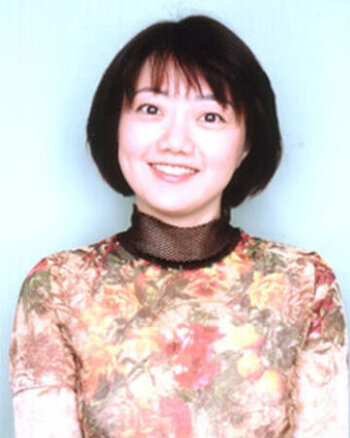 Sakiko Tamagawa, also known as Sakiko Ikeda following her marriage, was born in January 20, 1962. She's a rather prolific seiyū from Tokyo, who started out playing Action Girls and later switched to mother roles. Her Fan Nickname is "Sakkochan". She works at Sigma Seven.

She began in show business acting in theatre and TV and audio dramas, but switched to voice acting exclusively during junior high school. In addition to anime, she's dubbed the Japanese voices of Tatum O'Neal and Phoebe Cates among others. She is also a singer with three albums to her credit.

As evidenced by her other stage name, Sakkochan is quite Happily Married to fellow seiyu Shūichi Ikeda.