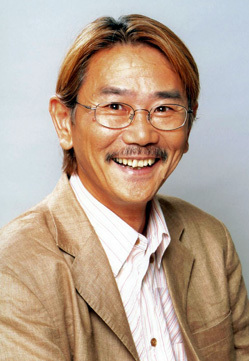 Keep them ham rolling in that oven, Sir!
I'm Shigeru Chiba. And my sword gets longer! AND THE SPIRITS ARE ALWAYS WITH- (chomp) Gaburincho!
Advertisement:

Real name Masaharu Maeda, Shigeru Chiba (born February 4, 1954) is a multi-media actor who has exceptional veteran voice acting status within the Japanese Animation Industry, and is known for being pigeonholed as The Narrator, the Big Bad, Butt-Monkey, and for being able to bring in the smoking-good HAM!

He was a former stunt actor who now makes occasional on-screen performances, such as the live-action adaptation of Patlabor.

He is also known to have over 20 credits in voice directing and audiography, directing fellow voice actors on their vocal performance within an animation project, such as Shounen Jump's Soul Hunter (1999).

LISTEN AND BE SURPRISED! These roles... certainly... SMELLS LIKE BAD SPIRITS!