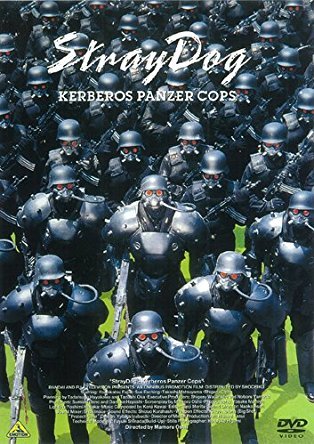 You came to the wrong neighborhood, Public Security
Advertisement:

StrayDog: Kerberos Panzer Cop (ケルベロス 地獄の番犬 Keruberosu: Jigoku no Banken - meaning Kerberos: Watchdog of Hell) is a 1991 Japanese science fiction film directed by Mamoru Oshii and stars Shigeru Chiba (And yes, THAT Shigeru Chiba) and Yoshikatsu Fujiki in the lead roles. This is the second film entry in Oshii's Kerberos Saga before Jin-Roh: The Wolf Brigade and after the The Red Spectacles.

The movie takes place years after Jin-Rohnote The event was also later featured in the Kerberos Panzer Cop's Act 8: The Fighting Dog II relased in 1999 when the Special Armed Garrison "Kerberos" unit is under siege at a compound used by the Tokyo Metropolitan Self-Police Department. While most of the unit holds off from being attacked by the Japanese Self-Defense Forces, Kerberos leader Koichi Todome is seen escaping while the unit conducts a last man stand. Three years later, surviving Kerberos officer Inui is released after he survived the siege and arrested for being involved in the mutiny.

Inui takes off for Taiwan, searching for clues after he got word that Todome was last seen in Taipei. After a brief confrontation with Koichi while spending time with a Taiwanese woman named Tang Mie, Inui finds out that Koichi is outside Japan for specific reasons and he was leading Public Security to hunt down the rogue Kerberos commander.

Inui is given two choices. Either help Public Security get Koichi to surrender and get his acquired Kerberos Protect-Gear equipment and be given a pardon or risk being killed or arrested.