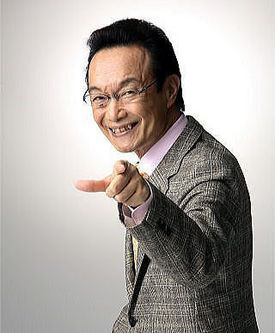 I won't even need the push off my farts!

I have no idea what that means but what confidence!

Pretty much the precursor of Nobuyuki Hiyama and the Ur-Example when it comes to Hot-Blooded characters. Akira Kamiya (born September 18, 1946) is one of the earlier and most famous anime voice actors, being the favorite by several other veterans, and his characters, while mostly Hot-Blooded, range from downright typical heroic, perverted or stoic. He is also one of the causes of the second voice actor boom. All good things would come to an end, however, as Akira himself has stated that as age caught up with him, he can no longer do all those famous role types again (which is why after the first Super Robot Wars Z, most of the series starring him tend to not get included (or in the case of Getter Robo, they use continuities that starred his replacement for Ryoma Nagare, Hideo Ishikawa) to spare him from doing new Hot-Blooded screams that could've been hazardous for him), thus prefers teaching and tutoring the next generation of voice actors.

Did a lot of jobs as Super Robot heroes, which is probably what makes him so legendary.

Wait a sec, what? That hardly qualifies as an article!
You're already dead.
What the hell?! That can't be - HIDEBU!!