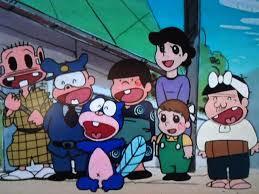 Tensai Bakabon (天才バカボン lit. Genius Bakabon) is a Shōnen gag manga written by Fujio Akatsuka which debuted in 1967. It originally ran until 1969 in Weekly Shonen Sunday. It follows the adventures of Bakabon and his Papa. It has had five anime adaptations, a theatrical film which crosses over with A Dog of Flanders, of all things, and three live action TV movies.The five anime adaptations are:

In preparation for Akatsuka's 80th birthday, Dengeki Bazooka magazine ran a sequel to the series titled Shounen Bakabon, where Bakabon finally goes to school and makes friends with a whole new cast of characters. However, with Bazooka's discontinuation in early 2016, the series' fate is left up in the air. It currently sits at 1 volume.

In 2018, a new anime has been announced called Shinya! Tensai Bakabon (Midnight! Tensai Bakabon) in accordance with the series' 50th anniversary, produced by Studio Pierrot, the same studio that produced Heisei. It comes with a whole new voice cast and some familiar faces from Pierrot's then-recent Akatsuka series, Osomatsu-san (I.E., Miyu Irino as Bakabon, the first male voice actor to play the young boy, and Takahiro Sakurai as...Unagi Inu) and aired as part of the Summer 2018 anime season.

For brevity's sake, the other adaptations will henceforth be known as Ganso, Heisei, and Rerere.