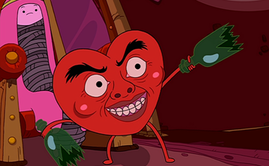 Not all examples are this literal.
Advertisement:

The Heart Symbol is a well-known symbol of love, peace, and life. You would think that they would always mean something good, right? But sometimes, they are used in association with villains for the sake of irony.

How the hearts are used may vary. Usually, all a villain needs is a costume decorated with heart shapes, or a heart-themed name. But in some cases, the villain is literally a heart-shaped creature.

Sometimes, the baddies who have this might have Love Freak and Heart Beat-Down as their schtick, but in a more twisted way. Another possibility is that it embodies Love Makes You Evil. There's also the version of where the heart symbol is rotated upside-down, showing that the heart symbol represents the exact opposite of its usual right side-up meaning. A more justified version is when the heart is cracked/slashed down the middle, which usually symbolizes a broken heart and tragedy.

Not to be confused with actual human hearts. That would be Evil Is Visceral. Compare Foul Flower, another normally innocent symbol used for evil.

A sub-trope of Light Is Not Good, and Heart Symbol. Related to Fallen Cupid. Because there are likely real people or organizations associated with hearts, No Real Life Examples, Please!