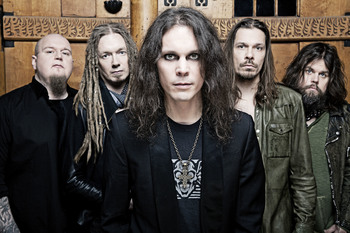 In 666 ways I love you and I hope you feel the same.
—"For You", originally the first track on their debut full-length album
Advertisement:

HIM (originally His Infernal Majesty) was a Finnish rock band formed in 1991 in Helsinki, Finland. Scoring a number of top-ten hits in Europe and South America, they also broke records by being the first Finnish band to have a gold album in the United States. HIM's breakout album, Razorblade Romance featured a heady mix of gothic-tinged ballads and heavy, crunching guitar riffs, a genre mish-mash which proved an instant success. HIM had five of their studio albums certified platinum in Finland with that album being certified double platinum in Finland and platinum in Germany.

The band's roots go all the way back to 1991 when Ville Valo and Mikko "Migé" Paananen founded it as His Infernal Majesty. Things were on and off for awhile, then they got serious and started recording music, resulting in a few unreleased demos and 1996's 666 Ways to Love: Prologue. The following year, they dropped Greatest Lovesongs Vol. 666, and during this time they were dogged with accusations of Satanism despite the devil never actually showing up in any of their work.

Well, they were accused by Moral Guardians, anyways. The real Satanists didn't like them because their art wasn't Satanic enough. Pressured on both sides, the band changed their name to HIM out of frustration just to get rid of the devilish name. Their 1996 EP is the only thing they released under their original name.note Even then, that still wasn't the end of it - they would have more name trouble for a completely different reason. When they began marketing themselves in the US for the first time, a Chicago act using the same name but with a lowercase i prevented the boys from Finland from using the name; they called themselves HER for awhile, and even some rare copies of Razorblade Romance contain the name, but eventually both parties settled, allowing both acts to use the same name worldwide.

They were successful enough at home, but then The Thirteenth Floor happened. In the European version of that movie, HIM's Razorblade Romance single, "Join Me in Death", played over the credits. This gained them a significant, loyal following in Europe and the UK, with their true North American breakout happening later, probably with "Rip Out the Wings of a Butterfly" which propelled their 2005 album Dark Light to gold status, making them the first Finnish act to ship over 500,000 copies in the US.

In 2000, on his way to a skateboard competition in Finland, a fellow by the name of Bam Margera happened upon the album Razorblade Romance, which made him an instant HIM fan. He got to meet the band in person, becoming a close friend of theirs in the process. The association has been rather controversial, with many feeling Bam doesn't fit the image the group strive for or that he's dragging them down by associating them with Jackass. Like it or hate it, the friendship between Bam and Ville is so strong Bam's been allowed to use the heartagram logo for his own personal projects. Ville even shows up in Jackass Number Two. We'll let you find out where.

HIM's genre remains a matter of dispute, though they are often classed as an alternative metal band. Irritated with such pigeonholing, lead singer Ville Valo frequently stated that they were essentially a 'love metal' band; a sound that can be best described as 'Depeche Mode meets Black Sabbath'. He also used other such musical fusions to describe various parts of the band's repertoire, mainly with reference to 70s & 80s music. Notably, the band's Heartagram logo is equally well-known.

The band called it quits in 2017 after collectively agreeing that while they were still friends and enjoyed playing their existing songs, they no longer had any real creative spark left as a group and it would be better to move on to other projects. The breakup was amicable however and they have not ruled out the possibility of a future reunion.

It didn't stop there, either - a live album, a remix album or two, a few greatest hits records, and more B-Side recordings than you can count.