Literature / I Shall Wear Midnight 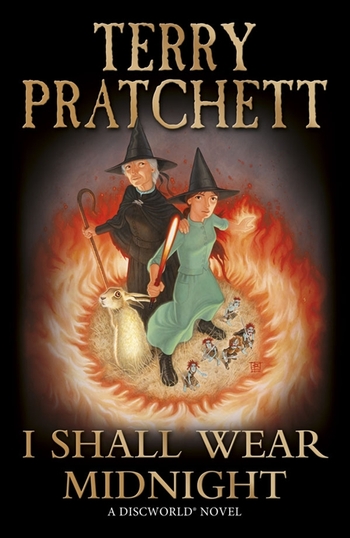 A man with no eyes. No eyes at all. Two tunnels in his head ...It's not easy being a witch, and it's certainly not all whizzing about on broomsticks, but Tiffany Aching - teen witch - is doing her best. Until something evil wakes up, something that stirs up all the old stories about nasty old witches, so that just wearing a pointy hat suddenly seems a very bad idea. Worse still, this evil ghost from the past is hunting down one witch in particular. He's hunting for Tiffany. And he's found her…
Advertisement:

The 38th Discworld novel and the fourth in the Tiffany Aching theme.

Tiffany is now pretty much a full fledged witch, with all the responsibilities that go with it; such as helping birth babies, cutting the toe nails of old ladies, and saving Mr. Petty from a lynch mob, no matter how much he might deserve the rough music.

But people are hardly grateful; here on the Chalk, where witches are not exactly popular, there's a marked decrease in gratitude and a major increase in malice, spite and irrational accusations. Even Roland (now the new Baron, since his father's finally shuffled off this mortal... disc) is growing suspicious of her, helped to no end by the mother of his fiancee. And all are having poison drip, drip, dripped into their ears and minds by something very old, very dark and very, very angry.

The Cunning Man has returned once more, and the witch shall burn. All witches shall burn.

Not if Tiffany can help it, though.

Preceded by Unseen Academicals, followed by Snuff. Preceded in the Tiffany Aching series by Wintersmith and followed by the final Discworld novel The Shepherd's Crown.