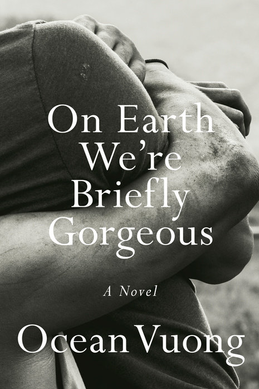 "I am thinking of beauty again, how some things are hunted because we have deemed them beautiful. If, relative to the history of our planet, an individual life is so short, a blink, as they say, then to be gorgeous, even from the day you're born to the day you die, is to be gorgeous only briefly."

On Earth We're Briefly Gorgeous is the debut novel of poet Ocean Vuong. It was published in 2019.

The book is an Epistolary Novel about a young Vietnamese-American man called Little Dog, writing to his abusive illiterate mother Rose. The novel chronicles the story of their immigrant family, spanning from his grandmother Lan's experiences as a prostitute in the Vietnam war to Little Dog's own coming-of-age in Hartford, Connecticut.