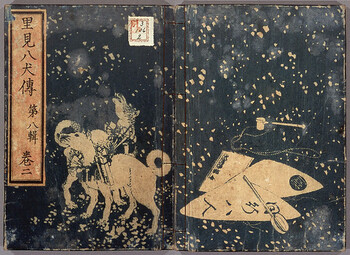 Nansou Satomi Hakkendennote "The Saga of the Eight Dogs of the Satomi Clan of Southern Fusa", also known simply as Hakkenden ("The Saga of Eight Dogs"), is a Japanese yomihon

(also famous for Strange Tales Of The Crescent Moon and his Japanese translation of Water Margin). Serialised from 1814 to 1842, it consists of 98 installments published over 106 volumes.

His territory under siege, Lord Satomi jokingly offers the hand of his daughter Fusehime ("Princess Fuse") to the family dog, if he'd bring him the head of the enemy commander. To his shock, he finds himself having to do exactly that. His dog Yatsufusa is in fact the incarnation of a vengeful spirit that Cursed the Satomi to become as depraved as beasts. And Fuse places so much value on integrity that she would never consider breaking an obligation, even if it meant condemning herself to a life of misery.

Two years pass, with Fuse eventually managing to purify Yatsufusa of grudge... only to learn that, despite avoiding any intimacy, she has somehow become pregnant with half-dog children. Soon after, Yatsufusa is shot dead by Fuse's husband-to-be Kanamari Daisuke, and Fuse follows by committing seppuku. But as she slits her belly, the spirits of her eight unborn "pups" emerge from the wound as mist, snaring her crystal prayer beads and then scattering to the winds to be born in different families.

Sixteen years later, Daisuke (now a monk named Chudai) wanders the land to find Fuse's lost children and assemble them under one roof as the "Eight Dog Warriors". Each bears the character 犬 (dog) in their family name, one of the crystal orbs from Fuse's necklace (each marked with one of the Eight Confucian Virtues), and one of Yatsufusa's peony-shaped birthmarks somewhere on their body. In order of appearance, they consist of:

Hakkenden is the longest novel in the Japanese language, and likely the most influential of the 19th century. Its success made Bakin the country's first career novelist, and inspired legions of imitators. Among other things it's a Trope Codifier for Gotta Catch Them All plotlines in Japanese media.

The story of the Eight Dog Warriors has received many, many adaptations over the course of the 19th and 20th centuries, from the stage to the cinema and TV. These include the films Legend of the Eight Samurai and Message from Space, as well as the manga Hakkenden: Eight Dogs of the East. Fuse, the Dog Warriors and their orbs also make a prominent appearance in the videogame Ōkami.