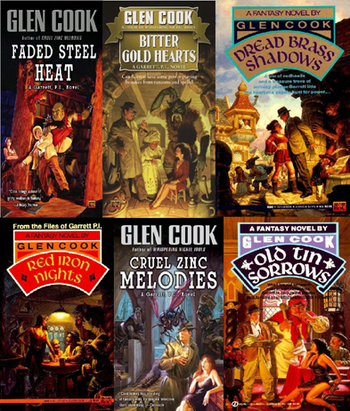 Garrett, P.I. is a long-running fantasy noir series by Glen Cook. A Low Fantasy story set in a High Fantasy world, more specifically a fantasy counterpart of St. Louis populated by pretty much every fantasy creature ever conceived, the series follows the eponymous private investigator through his Chandleresque adventures.
Advertisement:

It also has elements of Nero Wolfe — after providing all the leg work and investigating, Garrett will sometimes call upon his immobile, dead-yet-dreaming partner, a Loghyr. The telepathic Dead Man, as Garrett calls him, will often deduce a possible solution to the mystery.

The character is named after author Randall Garrett, whose Lord Darcy series was one of the first to place a detective in a fantasy setting. The series has also been compared to (and may have partially inspired) The Dresden Files as its opposite. Instead of a wizard using magic to investigate and solve crimes in our own world, Garrett is instead a fairly "traditional" detective in a fantasy world who uses real-world (and fairly mundane) techniques to unravel his mysteries.

Garret has also appeared in "The Shadow Thieves", a short story published in 2011's urban fantasy collection Down These Strange Streets, and "an investigator from TunFaire" was mentioned in The Dreamland Chronicles by Wm Mark Simmons.

Garrett P.I. has examples of: