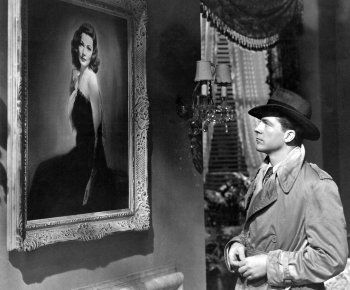 "I shall never forget the weekend Laura died. A silver sun burned through the sky like a huge magnifying glass. It was the hottest Sunday in my recollection. I felt as if I were the only human being left in New York. For with Laura's horrible death, I was alone. I, Waldo Lydecker, was the only one who really knew her..."
— Waldo Lydecker
Advertisement:

New York City police detective Mark McPherson is investigating the murder of Laura Hunt, who had become one of the biggest names in the advertising business, thanks largely to the help and influence of her mentor, Waldo Lydecker. McPherson puts together the pieces that led up to the murder, and questions everyone from the dead woman's aunt to her fiancé, but finds himself slowly falling in love with the late Laura, particularly from staring at her portrait.

Laura is a 1943 novel by Vera Caspary. Originally, the story was supposed to be a play, but, after it failed to materialize, it was written into as a book. The novel was adapted by Otto Preminger into a classic 1944 film starring Gene Tierney as Laura, Dana Andrews as McPherson, Clifton Webb as Lydecker, and Vincent Price as Laura's fiancé Shelby Carpenter. The film was one of the first to be labeled Film Noir, being one of the Trope Makers of the genre. It was also later adapted into a TV play.