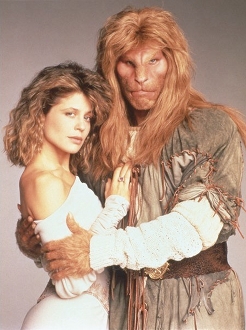 A Beast Man (or woman, or what have you) is a humanoid character with traits reminiscent of an animal. They might have claws (even on their toes), fangs, either heavy hair or actual fur, possibly horns or even scales, and their eyes will usually be structurally different or yellow. If you want to be fancy, the technical term is Zoomorphism.

Usually, beastfolk behave more or less like humans, or at least such as to fit in amongst the overall assortment of intelligent races in the setting, but similar to how the Funny Animal might have a Furry Reminder, the "beastman" might have "My Instincts Are Showing" moments from time to time. If they have super powers, these will usually include Super Senses, Super Strength, Wall Jump, Running on All Fours and an enhanced immune system coupled with a Healing Factor, the specifics depending on which animal the Beast Man is reminiscent of.

If this isn't the character's default, natural form, it can result from a Werebeast using a Partial Transformation, Shapeshifting, or gene-splicing/magical transformations.

Note that despite the Japanese term kemono literally translating to "beast", kemono does not automatically go under here — kemono has a variety of definitons due to Language Drift, one of which includes the humanoid bodied anthropomorphic animal. On the other hand, the Japanese term jyūjin (獣人) does translate directly to this trope, and a character called a jyūjin would go under here.

This is a sub-trope of Monstrous Humanoid. Related to Humanoid Abomination, Half-Human Hybrid and Little Bit Beastly. Plant Person would be the equivalent trope for characters whose nonhuman traits are derived more from flora than fauna.

Compare Animorphism and Our Werebeasts Are Different for humans who transform into animals, and Kaiju, equally beastly creatures that aren't quite human-shaped and possibly wander around Eldritch Abomination levels. See also Hu Mons, Mons who are not human but have human-like traits and anatomy.

See also All Cavemen Were Neanderthals and Horned Humanoid and Bigfoot, Sasquatch, and Yeti. Often overlaps with Animal-Themed Superbeing or Intelligent Gerbil.