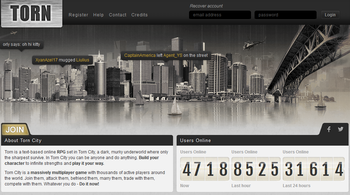 is a text-based MMO game created in 2004 in which the player takes on the role of a petty criminal and works to make a name for themself in the eponymous city. This is done by building muscle at the gym, commiting crimes, finding a job, and joining factions, though there are several other ways to make money and rise in power. From the start players have the complete freedom to do what they want and make friends (or enemies) as they level up. In addition to the criminal aspects of the game players can also take education courses to improve their stats, buy/upgrade property, and shop at various stores for supplies and equipment.