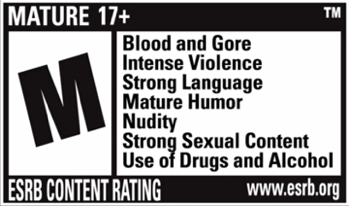 "We're in the money!" note Pictured is the ESRB Content Rating for Grand Theft Auto V.
"Babble babble, bitch bitch, rebel rebel, party party
Sex sex sex,note This can also be interpreted as "six six six", which works just as well. and don't forget the violence."
— Marilyn Manson, "This Is the New Shit"

When video gaming first started, almost all of the games created were playable by children. Not to say that early games weren't enjoyable by many adults (they were), they just lacked the mature themes that would be unsuitable for younger audiences — because, let's be honest, it could be pretty hard to get graphic on some of these older systems (though not impossible...). Some of this was due to the Censorship Bureau imposed by Nintendo in the early 1990s; when Nintendo dropped this and backed an industry-supported ratings system, developers became free to develop whatever they desired, and thus began making games that were more realistic in their depiction of violence, and along the way, containing Darker and Edgier themes than previous titles.

But thanks to the success of a few specific M-rated titles, the clones and copycat titles that followed them, and the media attention that followed both, today there is a public perception that developers focus solely on extremely violent titles targeted at "hardcore" gamers (that is, those who believe "G" rated movies and "E" rated games are "for kids only" and consider those who do watch "G" rated movies and/or play "E" rated games to be a mark of No True Scotsman), because hardcore gamers are supposed to be the most profitable demographic. This results in even more attention from Media Watchdogs and Moral Guardians alike, and if those titles are successful, ultimately reinforces the notion of M-rated titles being the best way to make a top-selling title, if not a license to print money outright — in other words, they're just Rated M For Money.

"M" rated games are not, in fact, guaranteed hits — only an average percentage of titles sell enough copies to be commercially successful, not at all much different from any other rating or genre in the market. Furthermore, general industry wisdom actually claims "T" for Teen is the most profitable rating, for the same reason that many movies target the PG-13 ratings bracket — these are the highest unrestricted rating of their respective scales, combining the most creative freedom with the broadest possible (if not potential) audience; some developers or publishers have actively restricted levels of violence and/or sexual content in their games order to achieve this rating. Indeed, in 2010 only 5% of video games released had an M rating.

However, this small minority was the focus of more hype than the rest, largely because many of them are AAA games, thus receiving the most attention of any video game.

The larger amount of hype M rated games tend to get than E, E10+, or T rated games can probably be attributed to the ongoing public perception that Video Games are for kids. Granted, this perception has significantly diminished over the last 20 or so years, but it's still prevalent enough (mostly among Moral Guardians and Media Watchdogs) to cause quite a stir with the gaming community. Thus, it makes sense that many would perceive M rated games as the key to breaking video games free of this stereotype and, thus, gaining them more respect as an entertainment medium. However, many of these games still contain vulgar and/or over-the-top humor that brings them down to a "drunk" level of maturity.

Ultra Super Death Gore Fest Chainsawer 3000 is what you get when this is the issue of a Very Special Episode. This trope has similar thinking to All Adult Animation Is South Park, where the only way anything can appeal to older audiences is if it's full of shock value, but often at the expense of actual maturity.

Complicating the issue is the rise of games with sex scenes (sometimes plot-related, often not) and other mature non-violent content such as language that superficially appear to be put in for "M for Money" reasons, but are actually there because of the game-makers' desire to reflect the current state of popular films and TV shows, many with large teen fanbases, which have become more sexually explicit. Defenders of games such as Witcher III which contain nudity and love scenes have said that people expect to see such scenes in TV shows and films so they expect to see them in games, too. Defenders also point out the perceived hypocrisy of people having no problem with scenes of extreme violence, yet having issues with sexual content and language.

Compare Avoid the Dreaded G Rating. While there are no direct ties between this and Rated M for Manly, it's not uncommon to see both tropes employed at the same time (since manly men will swear, shoot people in the face, and bankroll big sales figures as a result).

open/close all folders
Anime & Manga
This can be disputed - however to many this trope has more or less been the state of anime and manga since the 70's. We would list the Japanese franchises which reek of this trope and have huge fanbases (e.g. Death Note, One Piece) but we should probably stop before we go overboard
Film
Live Action TV
Professional Wrestling
Tabletop Games
Video Games
Western Animation