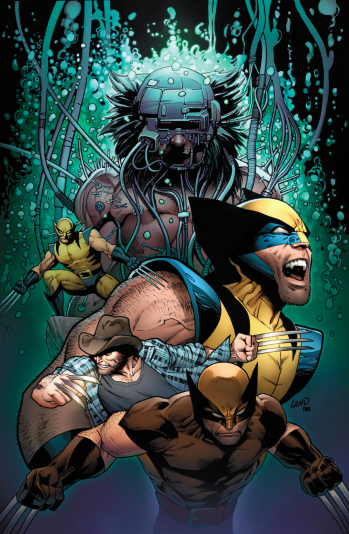 "I'm the best there is at what I do. And what I do isn't very nice."
— Wolverine
Advertisement:

The '90s Anti-Hero. The Mutant Superhero. The Healing Factor Superhero.

He first appeared in The Incredible Hulk #180 (October, 1974), making his true debut in the next issue as an adversary until the two teamed up to fight the Wendigo. Both issues were written by Len Wein and drawn by Herb Trimpe, though John Romita, Sr. is credited with the original design of the character. Wolverine would go on to join the X-Men the following year, with his true origins remaining ambiguously buried in a mishmash of false and real memories for decades, as his popularity skyrocketed. He would gain his own miniseries, and then his own title, and then his own cartoon, and then spawned tonnes of characters based off of him, then his own film, trilogy, and then... well, then he was kind of everywhere... and still is. Even here on TV Tropes.