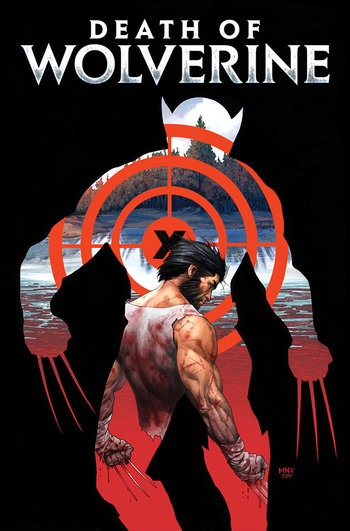 Death of Wolverine is a 2014 comics event centering around the death of Wolverine. It chronicles Wolverine's final battle after he lost his Healing Factor during the "Killable" arc of his solo series, and the impact its aftermath had on many of his friends and enemies. The lead-up to the event was recounted in the final five issues of Volume 6 of his solo series and its annual, and were marketed under the tagline 3/2/1 Months To Die, respectively. The event itself was contained within the four-part Death of Wolverine limited series.

With Logan slowly dying of adamantium poisoning without his healing factor to keep him alive, he's forced to confront numerous enemies and allies from his past, including Reed Richards, Nuke, Kitty Pryde, Lady Deathstrike, Sabretooth, Viper, the demon ninja Ogun, and ultimately, Dr. Cornelius. In the end, Logan sacrifices himself to save Cornelius' test subjects from his attempts to restart the Weapon Plus experiments.

The event was followed by several tie-in series and one-shots:

In addition to these series and one-shots, the impact of Logan's death is also explored in Storm #4, and issues #10-11 of Wolverine and the X-Men (Marvel Comics). And as noted above, the ongoing Wolverines spun out of the event, and follows the continuing adventures of the cast of The Weapon X Program and The Logan Legacy. The series was followed up with Hunt for Wolverine and later Return of Wolverine.

Death of Wolverine and its tie-ins provide examples of: