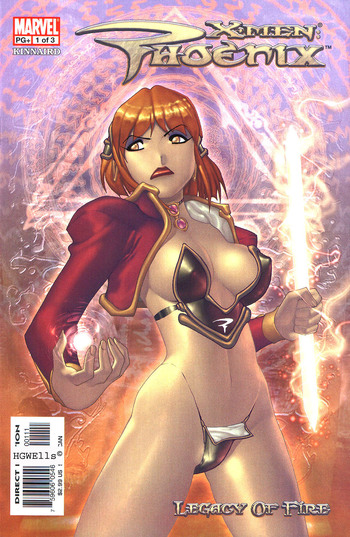 Wow, check this out... someone approved a PG rating for this
Advertisement:

X-Men: Phoenix – Legacy of Fire is a 2003 limited series written and drawn by Ryan Kinnaird and published under the Marvel MAX print. Its part of the Marvel Mangaverse continuity, officially designated Earth-2301.

The story follows the adventures of Jena and Madelyne Pyre (the Mangaverse counterparts for Jean Grey and Madelyne Pryor, respectively). The two sisters are the last surviving members of the Clan Pyre, a group of demi-humans that safeguard the plane of Limbo and possess the ancient power of the Phoenix, an omnipotent entity responsible for creating their world. As Jena is prepared by her sister to inherit their family heirloom, the Phoenix Sword, a mysterious outsider appears to steal the weapon and forcing the two heroines to embark on a quest to retrieve it.

The series was originally scheduled to be released on as a regular Marvel title (as evidenced by the PG rating in the first issue), but it was bumped to a Marvel MAX publication because the copious amounts of fanservice pushed the comic into a more mature territory, even though there is no explicit content like other MAX titles. Only three issues were ever released. While the ending implied more adventures were to follow, due to the overall failure of the Mangaverse brand, a sequel never manifested, and the book is assumed to be cancelled along with the other Mangaverse projects.