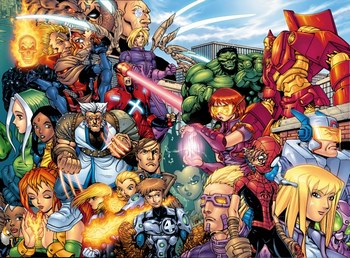 Western characters done in an Eastern style as viewed by Western creators.
Advertisement:

Marvel Mangaverse was a Fifth Week Event from the early 2000s that attempted to blend the Marvel Universe and its superheroes with a healthy dose of the usual tropes one would find in Manga and Anime.

The results were... less than stellar. As many reviews pointed out, while it had the style of manga, it was essentially only a cosmetic choice and the stories didn't seem to benefit from the genre shift. Not to mention being a cluttered mess that tried a bit too hard to include every superhero and villain that it could. However, it was still a worthy experiment in trying something different with the Marvel Universe, and the original event was popular enough to spin off into a (short-lived) monthly series, as well as a New Mangaverse revival in 2006.

Compare with Ame-Comi Girls, a similar Animesque series from DC Comics based on a series of figurines of their female characters.

The Mangaverse's designation in the Marvel Multiverse is Earth-2301, though an alternate version of it exists called Earth-7122.