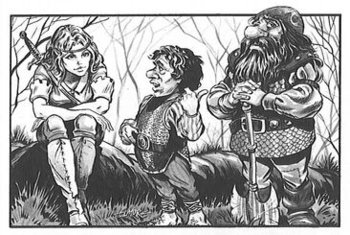 An elf, a halfling, and a dwarf.
Advertisement:

Demihumans are the Fantasy Counterpart to Rubber-Forehead Aliens. Related to Half Human Hybrids, Human Aliens, and Human Subspecies. Mythology and folklore have no shortage of fantastical beings that resemble good old Homo sapiens until you start to notice something off about them. Depending on the story, they've been called elves, dwarves, giants, angels, trolls and many other names. Most of the Standard Fantasy Races are demihumans of some sort.

Typically, creatures that fit this trope have some sort of physical trait that distinguishes them from regular humans. They may have:

This serves as a supertrope to numerous types of demihumans with their own tropes, although all or only some of them may be portrayed as such in any given work: