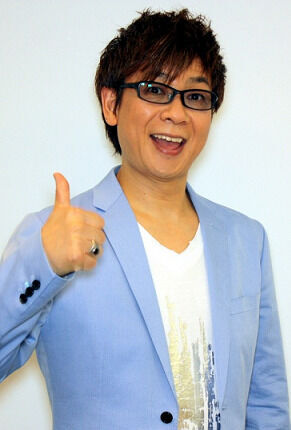 Yamadera-san (born June 17, 1961) is more than that, of course. He usually voices cool men (Besides Spike, Kaji from EVA counts as well), but what makes him such a famous VA is his ability to just do ANY type of characters, including Donald Duck and "Boxer" (Balrog/Mike Bison). He also has dubbed actors for American films dubbed into Japanese, including Jim Carrey, Eddie Murphy, and Robin Williams. He was married to fellow seiyuu Mika Kanai, from 1994 to 2006, and to seiyuu/singer Rie Tanaka since 2012 to 2018. In 2021, he announced his third marriage to singer Robin Shoko Okada. He is also a skilled "monomane tarento" (impressionist), as his appearances

in the variety show Monomane Grand Prix would prove.

During a 2012 interview, it was mentioned that he didn't plan to be a voice actor and did initially consider being a TV/film-only actor or be involved in working in a sales company.

Has also been in