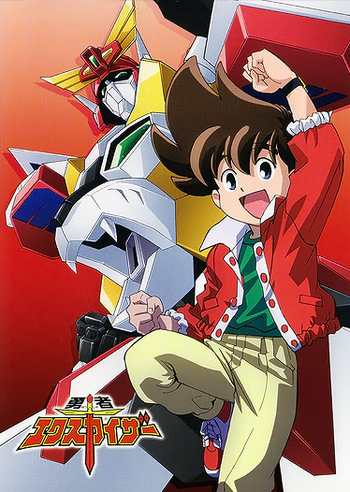 The beginning of a series of brave and courageous talking robots in Japan taking pages from Convoy/Optimus Prime.
Advertisement:

Brave Exkaiser (Yuusha Exkaiser) is the first installment in the Brave Series. It was broadcast in 1990 through 1991, and mostly draws inspiration from Transformers.

The story begins with Space Police officer Exkaiser and his men, the Kaisers, pursuing a band of Space Pirates known as the Geisters to Earth. As Energy Beings, both the Kaisers and Geisters are forced to possess mechanical bodies before they can get anything done, though. Exkaiser himself possesses a car belonging to the family of a young boy named Kouta Hoshikawa, who soon discovers his secret and befriends him. With Kouta now by their side, the Kaisers fight to prevent the Geisters from looting Earth's treasures!

Exkaiser was so popular, it soon spawned seven Brave shows after it. Even today, long-time fans still remember it fondly.

This show provides the following tropes: