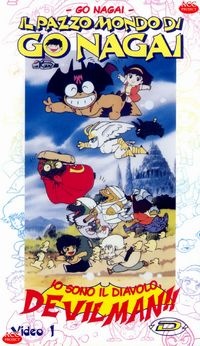 Italian poster for the OVA
Advertisement:

CB Chara Go Nagai World was a 3-part OVA series that was a homage to the work of Japanese manga author Go Nagai. Basically, it was a crossover among three of his series -Devilman, Mazinger Z and Violence Jack, with cameos from a few others- in which the characters find themselves in a "Chi Bi World" (another term for Super-Deformed.) Although mostly a comedy, it features some good action, one or two touching moments, and some pretty good music and animation. You can watch it here: [1]

The story starts with the main Devilman characters -Akira, Ryo and Miki- waking up one day to find that they've been turned into midgets (!) and that the world is now composed of floating islands that orbit a "sun". Note that they already know they are Manga characters, but don't know why they have had such a "style change." They set out for the land of demons to try to find an explanation, but end up tangling instead with the female demon Sirene, who claims Devilman is her lover! This in turn gets interrupted when the Mad Scientist Dr. Hell kidnaps Sirene to be HIS bride! The characters then go to "Mazinger's World" (the islands are linked by thin natural bridges) to recover her. There Akira befriends Koji, the Mazinger's pilot, but Ryo (who is secretly Satan) ends up taking over Dr. Hell's operation. He discovers that their entire universe is just part of Go Nagai's imagination and tries to use it for his own purposes, but is opposed by Devilman and Mazinger. Their battle ends up in Violence Jack's world (and confirms the canonical connection between it and Devilman's.) Everything ends up well for everybody — except perhaps for Ryo.

Tropes featured in the movie: