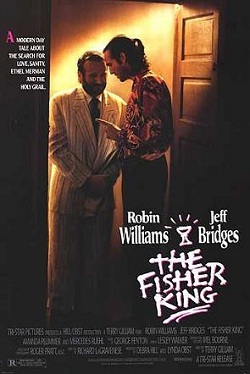 If you are looking for the trope about rulers whose lands reflect their state of being, hop on over to Fisher King.

The Fisher King is a comedy-drama film made in 1991, written by Richard LaGravenese and directed by Terry Gilliam. It stars Jeff Bridges, Robin Williams, Mercedes Ruehl, Amanda Plummer and Michael Jeter. The film is about a radio shock-jock who tries to find redemption by helping a homeless man whose life he inadvertently shattered.

Jack Lucas (Bridges), a cynical, arrogant shock-jock talk radio host, lives a selfish, high-profile life until his insensitive and ill-timed advice spurs an unstable caller to commit a mass shooting at a crowded Manhattan restaurant. The incident costs Jack his career, and his guilt sends him into a deepening spiral of bitterness. Three years later, Jack runs a video-rental store with his long-suffering girlfriend Anne. While heavily intoxicated and depressed, he attempts suicide. Before he can do so, he is mistaken for a homeless person and is attacked and nearly set on fire by ruffians. He is rescued by Parry (Williams), a deluded homeless man on a mission to find the Holy Grail. Jack learns, to his horror, that Parry is a former English professor Driven to Madness by the death of his wife, who was murdered in the mass shooting Jack unwittingly caused. Parry is pursued by a hallucinatory Red Knight, a terrifying figure that seems to appear whenever he comes too close to remembering his former life.

At first, Jack believes that Parry has come into his life to punish him for his sins, but gradually he begins to hope that by helping Parry, he himself might be forgiven. With Anne's help, Jack attempts to rescue Parry by giving him a job and even helping him meet the mousy young woman whom Parry has deemed his princess lointaine. But Parry insists that the only thing that he wants of Jack is help in his quest to find the Grail. Desperate for peace, Jack allows himself to be roped into the mad quest in the hopes that it will bring him the healing he seeks.