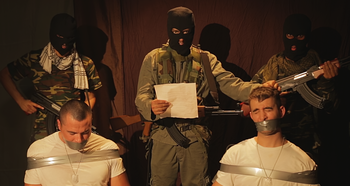 "Those aren’t the words of a certified clinical psychologist filing a report... those are the words of a woman with a bag over her head, sitting between a camera and a flag, moments before her third finger’s hacked off."
— Colm Mullan, Chrysalis Visits The Hague

A more modern version of the classic ransom note, gaining popularity in recent years with the increasing use of the internet and real life use by groups like Al-Qaeda.

Basically, our particular hostage is tied to a chair with a flag backdrop, while one or more bad guys in balaclavas look menacing with firearms. Then the hostage is forced to a) denounce his country b) read out his captors' demands c) beg his nation's leaders to help or d) a combination thereof.

Other variations include placing the hostage in mortal peril with a ticking clock.

If the bad guys don't get what they want, things might turn into a Snuff Film.