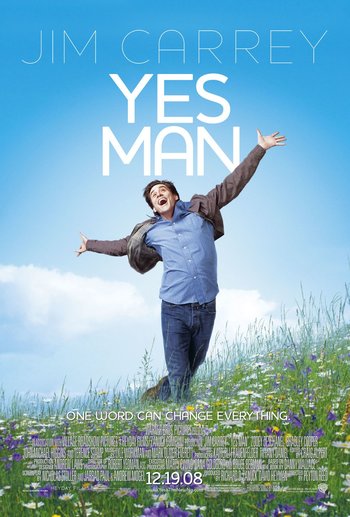 One word can change everything.
"The world's a playground. You know that when you're a kid, but somewhere along the line everyone forgets it."
— Allison
Advertisement:

Yes Man is a 2008 film where Jim Carrey has to say yes to everything.

Carl Allen (Jim Carrey) is a divorced, dead-end jobbed, stick in the mud. He says no to everything and everyone. When a friend drags him to a self-help seminar, all of that changes. Instructed to say "yes" to everything, Carl starts branching out and trying things he would never have agreed to before, whether he wants to or not. When he says "no," terrible things seem to happen to him.

It's very loosely based on the memoir Yes Man, by Danny Wallace.