Literature / Zen and the Art of Motorcycle Maintenance 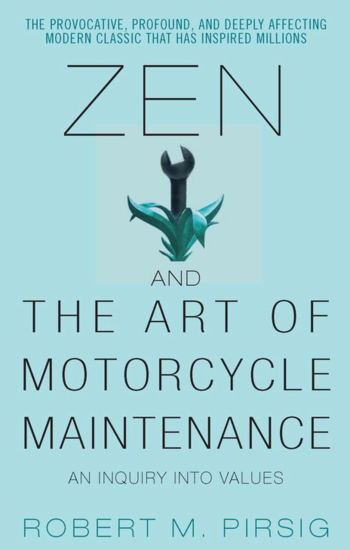 What follows is based on actual occurrences. Although much has been changed for rhetorical purposes, it must be regarded in its essence as fact. However, it should in no way be associated with that great body of factual information relating to orthodox Zen Buddhist practice. It's not very factual on motorcycles, either.
Author's Note
Advertisement:

It's a book by Robert M. Pirsig about a lot of things, but the narrative that gives it structure follows a father and son's cross-country motorcycle trip in 1968. The story is semi-autobiographical and presented strictly from the father's point of view as they travel. It is the nature of traveling by motorcycle for there to be long periods of time in which conversation is impossible and so the reader is privy to the musings, observations, and memories of the father between stops in conveniently chapter-length essays he calls "Chautauquas".

It was later followed by a lesser known novel called Lila, in which Pirsig systematizes his musing into a coherent metaphysical framework - the Metaphysics of Quality.