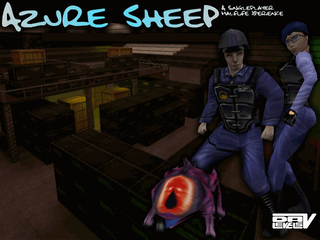 Behold my cool right boot.
Azure Sheep is a single-player modification of Half-Life 1 made by italian developers Andrea "Toadman" Butti and Davide "DAV" Cinthao - the founder of DAV Levels. Later they made another mod taking place in the same universe parallel to this one's story named Point of View.
Advertisement:

Azure Sheep tells the story of a generic Black Mesa security guard Barney or rather Just Barney (because with all that recent mess around BlackMesa he can't remember his whole name) and his colleague and love interest Kate, code-named Azure Sheep.

Just Barney didn't want to be a security guard but, you know life, he was lead to be one. He had a secret dream, he was writing a novel and... Well, that's another story.

Just Barney had another dream: to become a Hero and save a princess.

When the Resonance Cascade occures he is on duty at one of the enterances to Black Mesa and in the ensuing chaos his partner Kate goes missing. He decides to venture into the facility to find and rescue her.

This mod takes place in slightly modified Half-Life 1 storyline and thus most of its tropes apply.

The story is currently being

remastered for the Black Mesa / Source engine by the HECU Collective team.