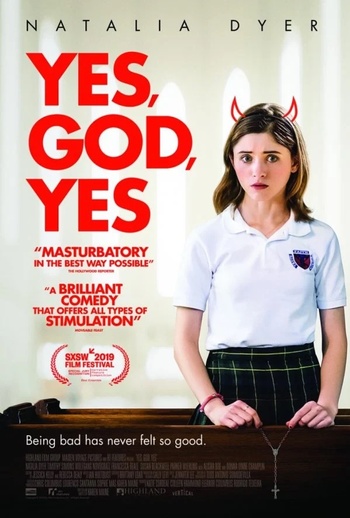 Being bad never felt so good.
Yes, God, Yes is a 2019 American Satirical Comedy-Drama, starring Natalia Dyer, and is the directional debut of Karen Maine, who also wrote it. It is based on the 2017 short film of the same name, also starring Dyer and written/directed by Maine. The film costars Timothy Simons, Wolfgang Novogratz, Francesca Reale, and Donna Lynne Champlin.
Advertisement:

The film is semi-autobiographical, based upon Maine's own experiences attending a Catholic high school in her youth. It premiered at SXSW 2019. After achieving favorable reviews, it was distributed in selected drive-in theaters and virtual cinemas on July 24, 2020. It later launched digitally and on video on demand on July 28, 2020. The film subsequently was acquired by Netflix, and made available on October 22, 2020.