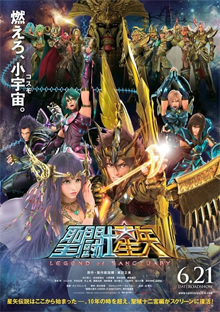 Save your Athena... Again.
"Young men... I entrust Athena to you."
— Sagittarius Aeolus
Advertisement:

Saint Seiya: Legend of Sanctuary is a 3D animation movie, inspired by the Sanctuary arc from the original Saint Seiya manga and intended as a Continuity Reboot of the anime series. Directed by Keiichi Sato (Tiger & Bunny, Karas), the movie was released in Japan on June 21, 2014.

The film follows Saori Kido, a young girl troubled by her mysterious powers. Upon being saved by Pegasus Seiya from an assassin sent to kill her, she learns that she is the reincarnation of Athena, the Greek God of Warfare who comes back to Earth to fight evil every time it threatens mankind. She should be aided and protected by her army, the Saints; however, when Saori's powers started to awaken, the Saints' leader, the Pope, deemed her a fake and ordered her assassination.

Seiya gathers his friends, fellow Bronze Saints, and follows Saori into Athena's Sanctuary, where they intend to confront the Pope and discover his true intentions. On their way to him, however, they will find themselves face to face with the most powerful Saints, the Gold Saints — Sanctuary's guardians, who protect the Pope and believe his claims.