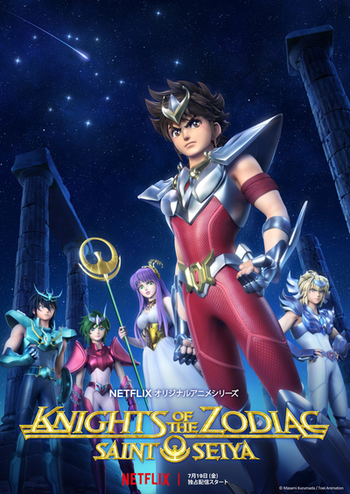 The Pegasus rises once again!
Netflix's reboot of Saint Seiya, created in collaboration with Toei Animation, directed by Cross Ange's Yoshiharu Ashino and produced by Avengers Assemble's Eugene Son. This show was the series' second foray into all CGI animation after Saint Seiya: Legend of Sanctuary. The six episodes were released in July/August 2019 as Part 1, with the second six released on January 23, 2020 as Part 2. The series is a loose retelling of the events of the manga, featuring an original villain.
Advertisement:

Every few centuries, the Gods are reincarnated onto Earth and fight over who shall have control over the planet. Amongst them is Athena, a goddess who works to defend mankind. Alongside her are her Knights, legendary warriors who can wield the power of the cosmos in order to aid Athena in her quest.

The Knights are led by the organization Sanctuary, who are ordinarily allied with Athena, but this incarnation of Athena was born with a prophecy that she would fail and bring about humanity's destruction. There is also Vander Guraad, a man who wants to liberate humankind from the will of the gods by using technology to destroy them and any Knights who stands against him.

In June 2022, a sequel titled Knights of the Zodiac: Saint Seiya – Battle for Sanctuary was announced by Crunchyroll.

Saint Seiya: Knights of the Zodiac provides examples of: