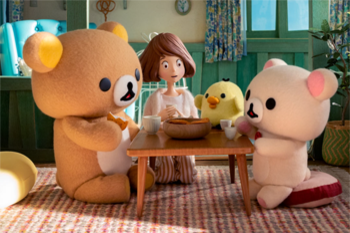 Her life might be a little mundane, but Kaoru gets to go home to her endearingly lazy roommate who happens to be a fuzzy toy bear.
Advertisement:

Rilakkuma and Kaoru is a Stop Motion anime that began streaming on Netflix on April 19, 2019, based upon the popular San-X characters. It depicts the 12 months that office worker Kaoru spends with Rilakkuma, a stuffed bear with a penchant for eating and lazing around, in contrast to her own stressful and anxiety-filled life. Joining them on this adventure are Korilakkuma, a smaller stuffed bear, and Kiiroitori, Kaoru's pet chick. Along the way, viewers also get to meet various side characters who become a part of Kaoru's life.

There have been various Stop Motion and animated shorts featuring Rilakkuma, but this is the first full-length series featuring the character. It is also the first piece of media to depict Kaoru, who is featured as The Voice in earlier Rilakkuma cartoons, and otherwise has not appeared at all besides being part of Rilakkuma's backstory.