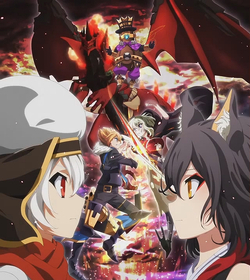 "A revolution in fiction... unfolds. Six miraculous nights are woven together through the lives of five souls."
Advertisement:

Chaos Dragon is a 12-Episode Anime based on Red Dragon, a Role-Playing-Fiction project involving an all-star crew of Kinoko Nasu, Gen Urobuchi, Ryohgo Narita, Izuki Kougyoku (the author of the light novel Mimizuku to Yoru no Ou), and Simadoriru (who works with the Stripe Pattern doujin circle). Hosted by the publisher Seikaisha, it was a six day Tabletop RPG session played by the various writers with Makoto Sanda as the Fiction Master.

Nill Kamui is an island nation struggling beetween the two powers of D'Natia and Huanglan. One day, the guardian deity of the country, the Red Dragon, rampages and destroy an army led by Ibuki, a descendant of Imperial lineage whose want to communicate with it. A joint party then formed, consisting of elite soldiers from superpower countries of D'Natia and Huanglan, to investigate the cause of Red Dragon's rampage... and either try to return it to its senses or destroy it.

Hitoshi Sakimoto has composed original music for the project, and Simadoriru was in charge of the art direction. Veia was in charge of Title Design. Kiyomune Miwa and Ukyō Kodachi, the writer of Macross Frontier light novels, are the Fiction System Designers who helped shape the fictional world with Sanda. Katsushi Ōta is the overall producer of the project. Much like the Record of Lodoss War series, its replays are serialized on their official website during January 2012. The members of the staff have prepared one thousand pages and two hundred illustrations for the scenario over the period of a year, so that the authors may enjoy their session.

SILVER LINK. produced the anime and it was released in Summer 2015.