Roleplay / There is no GATE; we did not fight there 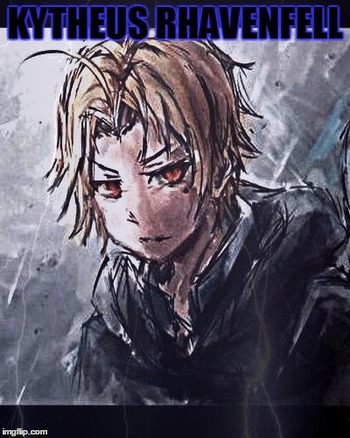 Subjugation Intensifies
"You took the hardest start and beat it like a cheap drum. There are still dangers, but right now, the future is so bright, you gotta wear shades."
Advertisement:

A quest happening in the universe of Gate run in Spacebattles. Can be found here.

There is no GATE; we did not fight there

is a quest set in the universe of Gate, many years before the opening of the Gate that connected the Empire to Tokyo. It is currently being run on the Spacebattles forum.

Kytheus Rhavenfell is a boy born to a bloodline of heroes, to inherit the untamed and remote West of the expansive Empire. From an early age, he is exposed to the grim determination and weariness of the people around him, for Rhavenfell, the Bloody Shield of the Frontier, is a harsh land filled with enemies on all sides. The citizens of the West are well used to grief and hardship, so are his parents, even the Siegebreaker. Despite their strength and determination, they all fray at the seams underneath the constant pressure. Exposed to his first battle at five years old, he begins his training for a life of hardship and sacrifice to allow the Empire to endure even in the near wilderness.

However, the Empire, despite the many years it has endured against the many terrors of the world, will soon face its most difficult trials. Threats and plots from both outside its borders and within its lands will soon come to a head; a storm is brewing on the horizon. Kytheus will soon have to find the strength to thrive in its midst, and to change fate with his own hands, supported by friends and family.

This Quest provides examples of: