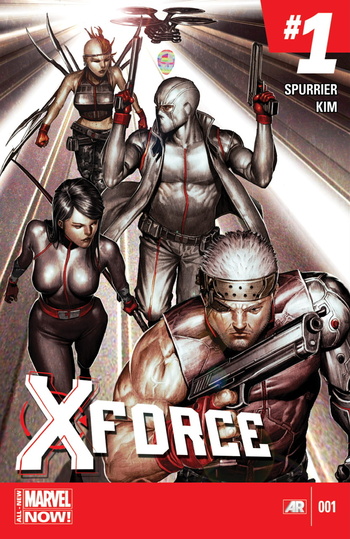 The Mutant Nation's Dirty Tricks Team
With the 2012 Marvel NOW! relaunch the X-Force brand was used for two different titles. The first is Cable and X-Force, set in the aftermath of Avengers vs. X-Men which sees a recently revived Cable leading a team consisting of Forge, Domino, Colossus, and Doctor Nemesis on mysterious world threatening missions of great importance, driven by visions that are also slowly killing him while being hunted as fugitives. The series lasted for 19 issues (February, 2013-March, 2014).
Advertisement:

The second Uncanny X-Force series sees Psylocke leading a new group of operatives consisting of Storm, Puck, Spiral, and a new character, Cluster/Lady Fantomex. Continuing some of the story points from the previous volume while crafting its own new stories and using other aspects of X-Men Lore. The series lasted for 17 issues (March, 2013-March, 2014).

Both of these stories came to an end with the crossover "Vendetta" and spun out into a new X-Force series in 2014, featuring Cable, Psylocke, Fantomex, and Marrow. The team has assembled in order to keep the Mutant Nation ahead of the curve in the Shadow Game of the world, despite having no borders or government. The series lasted for 15 issues (April, 2014-April, 2015).

Following Secret Wars (2015), the series has something of a Spiritual Successor in the form of Uncanny X-Men (2016).