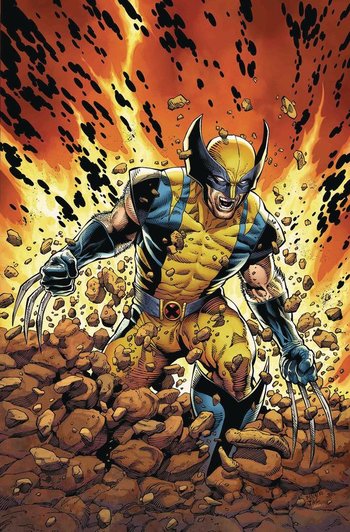 He's the best! Around! Nothing's ever gonna keep him down!
Advertisement:

Return of Wolverine is a five issue limited series from Marvel Comics, written by Charles Soule with art by various artists and released as part of the Marvel: A Fresh Start relaunch.

After his death, his friends mourned him. With his reappearance, everyone looked for him. But how did Wolverine return? The final part of Charles Soule's Wolverine trilogy, starting with Death of Wolverine and followed by Hunt for Wolverine, Return of Wolverine will tell the tale of how Wolverine escaped his inescapable death.

Waking up with no memories but a name and people to protect, Wolverine must once again outrun his past as he tries to piece his life back together. But some parts are better left forgotten, and some people don't want Wolverine to return...

After this series, Wolverine will go on to reunite with an also resurrected Cyclops in Uncanny X-Men (2018)... oh boy.

Tropes applying to Return of Wolverine: