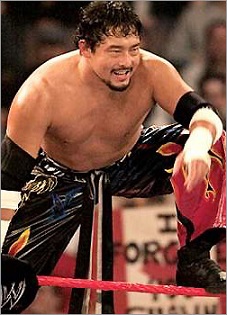 Yoshihiro Tajiri (b. 1970) is a Japanese Professional Wrestler and promoter best known for his time in ECW from 1999-2001 and later in WWE.

He made some appearances for WWE in 1997 in the early stages of its Light Heavyweight Division. He returned to CMLL in 1998 and stayed until he made his ECW debut in January 1999. He made his PPV debut with a win over Super Crazy at ECW Guilty As Charged 99, January 10, 1999, kicking off their big feud. Tajiri would also feud with Little Guido Maritato and Jerry Lynn. As a Heel, he would join the Power Stable the Network before splitting off and siding with Mikey Whipwreck and the Sinister Minister. They would win the ECW World Tag Team Titles

on August 25th, 2000 and lose them the next day to the FBI (Maritato and Tony Mamaluke.) Tajiri also held the ECW World Television Title

. In WWE, he would hold the WCW United States Heavyweight Title

during the InVasion/Alliance angle, as well as the WWE World Tag Team Titles

"Coach, you are liar! I want rematch!"