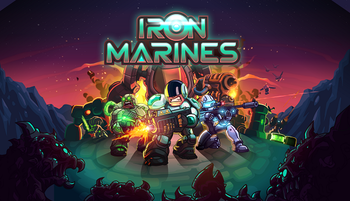 When the going gets tough, the tough call the IRON MARINES!
Iron Marines is a Real-Time Strategy game developed by Ironhide Game Studio, the same studio that brought to us Kingdom Rush. It's set in a sci-fi galaxy, where the player controls their Space Marine Hero Unit, summons squads, captures objectives and destroys enemies around the map. It was first released on mobile platforms in September 2017, and then on PC on May 15th, 2019.
Advertisement:

To aid the Space Marines in their goal, the player controls their Hero Unit with unique abilities, as well as a few squads. These can be used to capture objectives and bases, the latter of which will provide a squad spawning area and also produce Etherium which is vital for buying squads and towers.

There are three classes of squad units: Army, Empyrean, and Mechs. Each squad type comes with three variants, each with their own advantages and disadvantages. If part of a squad is destroyed, they can regenerate their lost units, but a whole squad being destroyed means that the unit is permanently lost.

There are also three types of towers used to defend your bases. These act as extra protection, as the enemies must take them down before they can attack the base itself. Buying upgrades for towers further increases their durability, and these upgrades have a cooldown before they're able to be used again.

Finally, the player has a Dropgun unit, which can be dropped to deal heavy damage in an area. Once landed, it will fire at enemies until it is either destroyed or expires.

The game includes examples of: