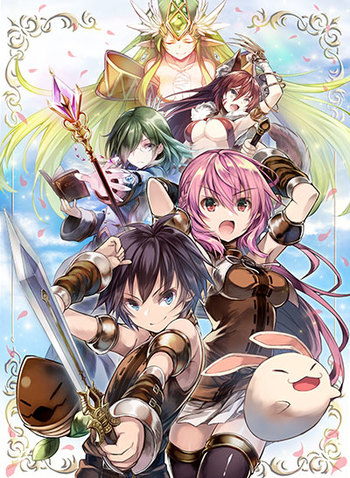 Iruna Online is a smartphone open-world Japanese MMORPG by ASOBIMO

released in 2007 as its first installment.

Long ago, the fantasy world of Iruna was created by the 12 gods of Iruna.A world of diverse flowers and animals, created by the goddess of species, Specia, was expected to continue for a long time being maintained by humans given various abilities and made in the image of god. However, the gods who fell in love with Specia started a battle over her resulting in a major conflict in heaven, dragging other gods in as well.The gods continued the conflict and started a war on land, involving the humans and leading the land to ruin; the once beautiful earth had forced animals and plants into extinction. Specia could not stand the plants and animals annihilated at her fault, so she pointed a knife to her heart.At that moment, Specia's tears fell to the earth, and onto the humans. Because the tears contained Specia's ability to create species, the human race was broken up into four different groups. The gods mourned Specia's death and reproached themselves for their folly: they left the world of Iruna. Several thousand years later; humans, called the Humes; the Diels, with dog like ears; the Kyuls, with the childish appearance despite of their growth; and the mysterious Elves, worshiping the 12 gods of Iruna. The four groups, repeatedly, through alliance and rupture, continued to fight.This long conflict resulted in the loss of the barriers of each of the four groups: the great military country; Empire of Slebinia, the Republican country, aiming to govern intellectually; Parul, the collection of city-states from the expansion of the Diel's thief guilds; Mithurna Federation, and a constitutional monarchy that could only be constructed by Elves; Darkan principality. To this day, the four countries have not reached a settlement, and are still continuing their battles.

The player takes the role of a nameless hero who rose during the conflicts in the world of Iruna.