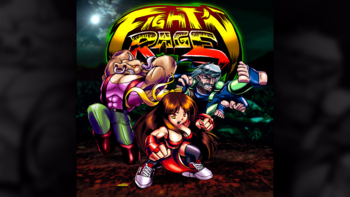 Fight'N Rage is a Beat 'em Up video game created by sebagamesdev, launched on Steam on September 19, 2017. Made by only one person (Sebastián García, although the soundtrack was made by Gonzalo Varela), the game is considered a tribute to all of the Beat'em Ups of The Golden Age of Video Games.

In a distant future, a great apocalypse known as "The Great Pulse" has devastated most of the technology on Earth, and the animals had mutated and reclaimed the planet under orders from "The Boss", whose only laws are the Law of the Jungle and that humans must die or be enslaved. But not everything is lost: two humans and a rebel mutant decide to fight against the savage regime by the Boss and free the oppressed humans.

Everything in this game is inspired by the classic Beat'em ups such as Streets of Rage, Final Fight, and Cadillacs and Dinosaurs. Including multiple combos and special attacks, cooperative local three-player mode, multiple paths and endings. It includes a variety of additional content such as a Battle Mode, Training Mode, and even the chance to play as any enemy that you've unlocked so far. The three protagonists are: