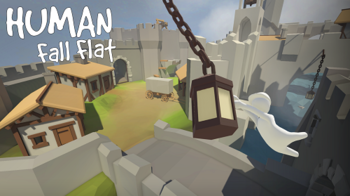 Human: Fall Flat is a puzzle-adventure-platformer developed by No Brakes Games and published by Curve Games. Its main gameplay hook is that the puzzles are entirely physics-based, meaning that any solution that seems workable most likely is, in addition to the player character having an exceptional amount of control over their environment.
Advertisement:

The game follows Bob, a Featureless Protagonist armed with nothing more than his hands and his brain as he maneuvers himself through non-linear dreamscape levels in an attempt to... well... it's not really clear what, but it really doesn't matter anyways. The levels are chock-full of incredibly devious puzzles for Bob to solve, and as stated above the game operates on real-world physics, meaning your most valuable companion and your greatest enemy will be the laws of physics themselves. Damn you, Issac Newton!

The game is currently available on Steam, Xbox One, Xbox Series X|S, PS4, PS5, and Switch.