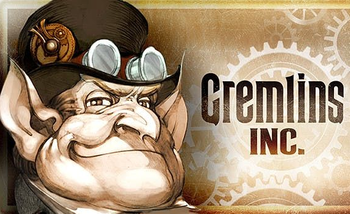 It takes place in a Clock Punk setting, where an underworld of rich and industrious gremlins is busily vying for power, which can be represented through cogs, prestige or plain fear, and they'll try every trick in the book in order to come out on top. After all, there are more than 130 cards to deploy, all with a range of varying effects, along with the more conventional Monopoly-like mechanics, such as one-way movement around a looping path, or jailtime.