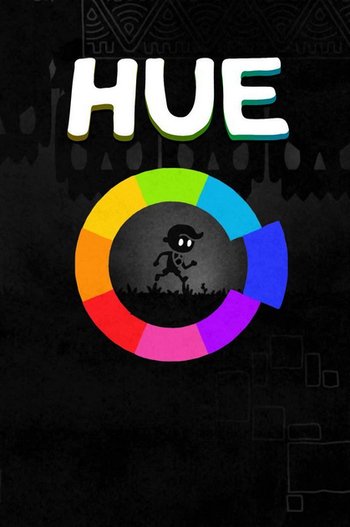 "Did you know, Hue, that every language has a word for black, and for white. For dark, and for light. The first color after that is always red. The color of blood and wine. The color of anger."
— Mother

Hue is an indie Platform Game developed by Fiddlesticks Games, and features the story of the titular protagonist, a young boy living in a monochromatic grey world. He awakens in his house one day to find his mother missing. While he searches for her, he learns about some research she was doing at a university, that would let her see the world in colors. All the while watched by a mysterious man who always seems just out of reach.

Hue's unique mechanic is the Annular Spectrum, a ring that contains eight colors (red, orange, yellow, green, aqua, blue, purple, and pink). On command, Hue can change the background color to any of the colors he possesses, causing blocks, boulders, traps, and anything of that color to disappear into the background. This is necessary to move and build platforms, avoid hazards, and more as Hue journeys on his quest to find his mother, all the while learning just what the Spectrum is, and how his mother created it.

Hue was released in August 2016 on PC, Xbox One, and PS4, with a Playstation Vita version released later. It would release on Nintendo Switch in August 2019. It won several awards for uniqueness and creativity.