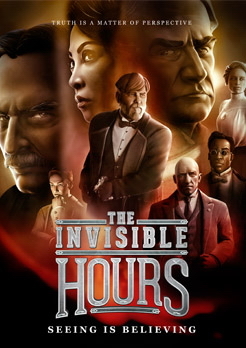 The Invisible Hours is a Virtual Reality Environmental Narrative Game in which the player moves freely through the set of an unfolding Historical Fiction drama, invisible and intangible. You can interact with the environment in a few limited ways, but you cannot affect the narrative or the characters of the story.

Six guests have come to Nikola Tesla's private island mansion, following a series of mysterious invitations. When the last one arrives, they find Tesla lying dead in the front hall of his home. With no way on or off the island, it is clear that one of the guests (or the butler) must have been the killer. But they each have secrets and designs of their own, and none of them are inclined to sit and wait for the police. Their unique ambitions and plots turn what begins as a Fair-Play Whodunnit into a grand, multi-party fiasco.

The cast of characters in this drama includes:

The Invisible Hours provides examples of: