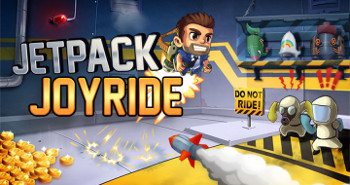 Well, this is some nice music for the main menu-

HOLY CRAP SOMEBODY JUST BLASTED THROUGH THE WALL AND STOLE THE JETPACK THAT WAS JUST LYING THERE!
Advertisement:

Jetpack Joyride is an interesting and addicting little mobile game developed by Halfbrick Studios, free for download on iOS, Android, PlayStation Network for the PlayStation 3, PlayStation 4 and Playstation Vita, and Windows 8 (formerly).

Our protagonist, Barry Steakfries is a down-on-his-luck gramophone salesman, with the business about to go bankrupt from low sales. One day, he finds a secret laboratory of "Legitimate Research" and sees their newly invented Machine Gun Jetpack. Excited for what he could do with it, Barry steals it and goes on the adventure throughout the entire laboratory and its Endless Corridors. As that last part implies, the goal is to travel as far as you can without dying.

This is the third game to feature Barry Steakfries as the protagonist, following Age of Zombies and Monster Dash, but it's apparently a prequel to both of them. After several updates, the game has coins, outfits, different jetpacks, various upgrades, gadgets and achievements. List of all jetpacks, outfits and vehicle skins as of December 2019 can be found here

Also has an India-exclusive version

and an arcade redemption game made by Adrenaline Amusements

. A board game adaptation by Lucky Duck Games was released in 2019. A sequel, titled Jetpack Joyride 2 was soft launched in early 2021 and released on Apple Arcade in 2022.

Example of:
The Masquerade Will Kill Your Dating Life