Literature / Cat Among the Pigeons 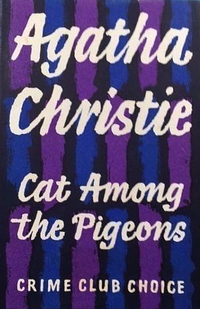 Cat Among the Pigeons is a 1959 mystery novel by Agatha Christie, featuring detective Hercule Poirot.

At the start of the summer term at Meadowbank School for Girls, a prestigious prep school in England, there is no reason for Miss Bulstrode, the popular but aging headmistress, to believe that the challenges facing her will be more than the occasional irate or inebriated parent. She scarcely listens when Mrs Upjohn, a parent, recognizes someone that she sees from her wartime days in the intelligence service. But there is a killer at the school who does not wait long to strike.

In 2008, ITV adapted the story for the eleventh season of Poirot. Tropes concerning the adaptation are listed on the series page.