Literature / The Case of the Velvet Claws 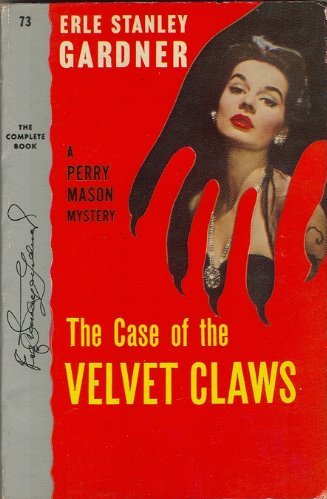 The Case of the Velvet Claws is a 1933 novel by Erle Stanley Gardner. It was the first ever Perry Mason novel.

Into Perry's law office strolls sexy femme fatale Eva Griffin. It seems that Eva was out having dinner with Harrison Burke, a well-known politician, when there was a robbery at the restaurant. Eva and Harrison made their way out, but the cops know that Harrison had a woman with him. A scandal sheet named Spicy Bits gets wind of this and is preparing to publish. Eva, who is married, enlists Perry to pay off Frank Locke, the editor of Spicy Bits.

Perry accepts the job reluctantly, since he disapproves of paying off blackmailers. In fact, his meeting with Locke is a fiasco as Perry insults Locke and Locke vows to publish. Perry soon learns a couple of surprising facts: the real publisher of Spicy Bits is not Locke (a front man), but wealthy high-society businessman George Belter. And Eva is Belter's wife.

Events take a turn when George Belter is murdered. Suspicion focuses on Eva, but the scheming Eva tells Perry that she'll implicate him. Perry finds himself needing to clear both his client and himself.

Adapted into a movie, The Case of the Velvet Claws, in 1936. Later adapted again into a 1963 episode of the Raymond Burr TV show.