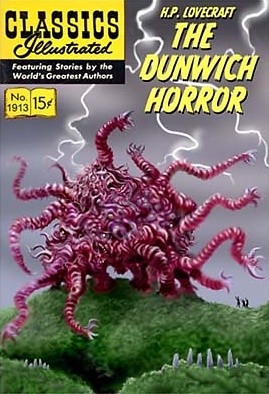 The town of Dunwich, Massachusetts is thoroughly unremarkable until Wilbur Whateley is born.

His "decayed" and inbred family was already unpopular due to their dabbling in the occult, and when Lavinia Whateley gives birth to a strange-looking child and refuses to say who the father was, it doesn't improve anyone's opinion of them. Wilbur grows incredibly fast - he begins talking at 11 months; by the time he's three, he looks ten years old; and at four and a half, around 15. The townsfolk don't trust him, as he gives them the creeps even more than the other Whateleys. For all that, though, they're still willing to sell cows to the Whateley mansion; money's money, after all, even if it is in the form of weird antique gold coins. Although for some reason, despite the truly vast amount of livestock Old Whateley buys, his herd never seems to get bigger...

The household only gets more suspicious with time. The farmhouse always seems to be mysteriously under construction, with more and more windows being boarded up; the townsfolk also suspect that interior walls are being knocked out. When Wilbur is ten, Old Whateley dies, shrieking instructions to Wilbur on his deathbed; two years later, Lavinia Whateley disappears on Halloween night and is never found.

Around this point, Wilbur begins to search for an unabridged copy of the Necronomicon, having learned all of what he knew from his grandfather's library; his copy of said book is a shortened English version, which he apparently found insufficient. He discovers that nearby Miskatonic University has a complete copy, but the librarian refuses to loan it out to him. So he breaks in to steal it, only to be killed by a guard dog.

And that's when things get really weird.

One of H. P. Lovecraft's most famous stories, it was adapted to film thrice: as a So Bad, It's Good Cult Classic in 1970, and a remake by Syfy in 2009, as well as part of a short stop-motion anthology film (along with "The Picture In The House" and "The Festival") by Japanese filmmmaker Ryo Shinagawa, H. P. Lovecraft's the Dunwich Horror and Other Stories; this short film can be viewed online here.

It has also been adapted thrice, generally more faithfully, as a Radio Drama, first as an episode of the long-running Suspense series in the 1940s starring Ronald Colman, later by the Atlanta Radio Theater Company, and yet again for the Dark Adventure Radio Theatre series as well as the Youtube channel Chilling Tales for Dark Nights

. Director Richard Stanley is currently working on his own film adaptation of the story, as a followup to his take on The Colour Out of Space.

The Dunwich Horror provides examples of: