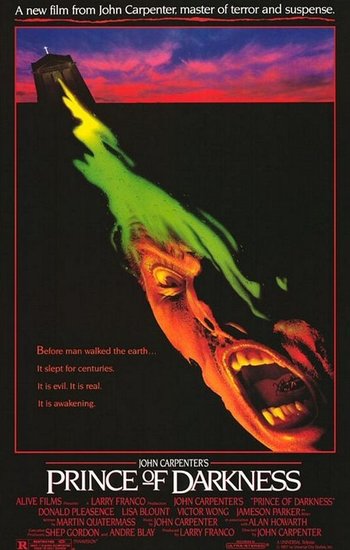 Prince of Darkness (1987) is John Carpenter's second film in his "Apocalypse Trilogy", after The Thing (1982) and before In the Mouth of Madness (1994). It is a slow-paced, atmospheric, creepy and mindscrew-y little film that doesn't get mentioned very often but is nonetheless an important piece in Carpenter's filmography.

A Catholic priest dies and a strange canister with a green, swirling liquid in it is discovered in the basement of an abandoned church. Another priest (Donald Pleasence) asks an old acquaintance, quantum physicist Professor Birack (Victor Wong), to investigate the mystery of the canister. The priest claims that the liquid in the canister is in fact the corporeal form of an ancient evil, which is starting to reawaken and influence the world around itself. He wants Birack to prove this scientifically, so that they can warn the world. To this end, Birack brings several of his students and fellow scientists of various fields to the church to study the canister, and they discover that it is 7 million years old and can be opened only from the inside.

However, when the green liquid starts to come out of the canister and to possess the various scientists, and crazed homeless people surround the church and kill everyone who tries to leave, not only do Birack and company have to run for their lives, but also to try to avoid the oncoming apocalypse.