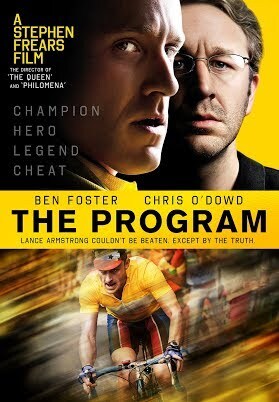 I used to believe in this sport and Armstrong is killing it!
—David Walsh
Advertisement:

The Program is a 2015 sports drama film directed by Stephen Frears and starring Ben Foster, Chris O'Dowd, Guillame Calumet, Jesse Plemons, Lee Pace, and Dustin Hoffman. The screenplay by John Hodge was largely based on the book Seven Deadly Sins: My Pursuit of Lance Armstrong by David Walsh.

The film follows the rise of cyclist Lance Armstrong from his battle with testicular cancer to his seven-year run as champion of the Tour de France. However, David Walsh, chief sports writer for The Sunday Times, starts to become suspicious of Armstrong’s streak and starts to investigate, leading to one of the biggest doping scandals in sports history.